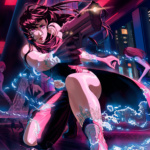 Recently we completed a piece of artwork for our upcoming Cyberpunk RPG The Metro and the art has been pretty well received. As I had done with some of the other art in the past I wanted to write up some of the choices in art direction we went through to get this piece completed.

Initially, Jim and I were talking about three poses on a two-page spread, the first pose was static with our protagonist Mink standing relaxed in an evening dress with a glass of wine. The third pose would be Mink in combat armor holding a pistol out towards a target that’s outside the frame. The middle image would imply the movement between the start and ending poses with some insets showing how the smart material garment rearranged its component parts from eveningwear to combat suit.

Mika from Robustart and I began talking about the piece and how we’d put all this action into one piece and basically, she said we shouldn’t. The concept sounded like something better suited to sequential art like a comic book, but if we wanted the most action in one piece we should focus on the middle pose. I wasn’t certain how Jim was going to take it but I gave up on the three in one image and asked Mika to proceed with some sketches. This is what I received.

So Mika and I had some differing thoughts about the sketches, her thinking was that the sketch on the left had the better composition as many of the lines in the piece all directed the viewer’s eye to the right-center of the frame. She even sent markup copies to show where the focus areas were.

I think if we were working in sequential art like a comic book that we could afford a frame where we only see the protagonist from the side and maybe we’re looking over their shoulder at some greater threat. In this image the threat is supposed to be out of the frame, so all that focus would be on a blank space. In the majority of RPG books, we usually see the protagonist’s face head-on, or just slightly to the side. I think this is one of those unwritten rules that you want to see the character’s expression, people look for faces to tell them what’s going on. The lines in the second sketch keep all of the focus just left of center, but it shows off the character and her pistol aimed at some unknown attacker just fine. We went with the second sketch. If you are not a one-person operation, share this around with your collaborators, get some buy-in if that matches the writer’s idea of the art order.

So with the direction chosen, Mika sends me back a more refined version of the basic sketch. Everything is whispy and rough at this stage, but this is the best time to make changes you’re basically approving the direction of the final piece right now. Anything you don’t change here is going to be hard and expensive to fix later.

Seeing nothing major different from the initial thumbnail sketch, I approve this sketch, no changes. Mika gets to working on some of the other details, and I get back a sketch with the background elements added.

Everything seems to be coming together and if you look very closely you can see the hexagon-shaped machines the smart material that the dress and combat armor are made from. This delighted Jim who had been describing the components as hexagons but hadn’t seen that coming out of the early sketches. Notice the pistol has changed alignment with the forearm from the previous sketch. Even as a gun guy I don’t think I would have minded the original too much. Sketch approved.

In this image, Mika went about inking the character lines and we lose all the background details, you might notice the hair has gotten a little more shape to it. In addition to the hexagon direction from Jim, I had mentioned some other kinds of shapeshifting technology from 2D media. In the right-hand glove, we can see the influence of Kenichi Sonoda’s Cannon God EXaXXion and Iron Man’s nanotech armor. In the combat boots, we see circuit-looking tendrils similar to what we see with Venom’s symbiote and Spawn. With the inking approved we move onto flat colors.

Mika sent over the flat colors. Jim said that’s a LOT of red when he first saw this progress pic. It’s important to note that flats aren’t shaded, they are very rough groupings of color and you should expect things to be refined from this stage. This is the time for the art director to say something if the rough colors aren’t right. If the colors don’t match the art order or the references provided.

This is the final image at low resolution, if you don’t have changes at this point, and if you haven’t already, it’s time to pay your freelancer. If you don’t do publication holds, put the image up on your social media and tell the artists they can share it on theirs. This helps the artist promote themselves and that helps pay the bills. Because we aren’t Marvel comics and the covers of an upcoming book don’t give away the ending of a previous book, we don’t do a lot of publication holds.