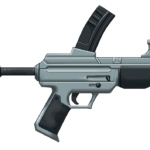 This week we bring you some flash fiction for all the Slavern fans out there. We wanted folks to get to know the different species of the Galaxy Pirates setting and we’re going to try to do that with some tie-in fiction.

For the Prize
by Thomas Parrott

‘For the prize! For the Crimson Fang!’

The scream rang out across the barren wasteland. It echoed among stone outcroppings. It was the signal to attack. A hundred panting screams answered it, and Slavern poured from their hiding places en masse. They flooded towards the convoy of haulers making its dusty way across the basin.

Gorna was one of the first to leap from concealment among the rocks. She was young, hot-blooded, eager to prove herself. Bloodlust tore her nervousness away. It poured fire into her legs, took her strides to leaping bounds. The vermillion cloth of her color-rag fluttered behind her as she sprinted.

She saw the reaction among the convoy. Grinning Skull clan in green colors, fresh from a raid among the stars and hauling their treasures back to the clanhold. Hardened sky-pirates every one. Heads snapped around, eyes wide and jaws gaping, ears swiveling back and forth desperately. They were surprised but only for a moment.

She didn’t waste the chance. Still running, she sprayed fire with her submachine gun. There was no aiming. Luckily a dozen other chatter-guns spoke up at the same time. Volume made up for a lack of accuracy. The first of the Grinners toppled, blood spraying as a bullet took him in the throat.

The convoy was recovering quickly. They were screaming now too, trying to organize their defense. One of them had jumped on a heavy repeater mounted on a haulercraft. It spat fire into the charging Fangs. The thunderous sound cut through the cacophony of battle as the gunner swept it back and forth. It ripped the life from Gorna’s clanmates like the arbitrary hand of a cruel god.

She dove for the cover of an upthrust of stone. A scream came from right behind her. She glanced back involuntarily. A male there had collapsed, hands clutching at his stomach. Molch. Blood pumped through his desperate fingers, and beyond was nothing but a pink ruin. For a moment their eyes locked, his wide and pleading.

Molch was as good as dead. Gorna put him out of her mind. The sharp spang of a nearby ricochet kept her from emerging into the open. She pulled a grenade from her bandolier and took a deep breath. It came out as a wheezing laugh of terror. She stepped into the open and threw.

The explosive hurtled through the air. It bounced off the roof and rolled into the bed of the hauler. The gunner had one moment to look down in surprise. The detonation tore him to pieces, hurling fragments of burnt bone and torn flesh in a grisly arc. With the heavy weapon silenced, the Fangs began to press forward once more.

Gorna whooped at the top of her lungs and held her gun high in triumph. A glorious kill! She looked to see if the raidleader had witnessed-

A bullet took her in the leg.

The limb buckled under her immediately and she collapsed to the ground. The pain was fast on its heels, white hot and screaming. The entry wound was small, little more than a red pockmark on the back of her calf. The exit wound was a bloody crater in her shin. Fragments of shattered white bone glistened in the ruin. The bullet must have come from behind, intentional or accidental.

The rest of the clan had caught up. No one even tried to help her. Instead, Gorna found herself trampled as they surged to confront their rivals. Screaming in rage and fear, she covered her head with her arms and tried to curl up into a protective ball. A foot came down on her wounded leg and her cries turned to pure agony. She viciously bit at the offender, clamping down on his leg with razor teeth.

She heard him hiss in rage and the last thing Gorna saw was the butt of his gun slamming down towards her face.

The world exploded into stars and darkness claimed her.

Gorna woke with a hiccough. Her entire body hurt and she could barely breathe. It took several moments for her mind to clear. Her mouth tasted of blood and a cautious testing revealed a few of her fangs were loose and one was snapped in half. Someone had fallen atop her; judging by the smell and the temperature of them, they’d been dead for hours.

Slowly and painfully, she dragged herself out from under the corpse. The broken haft of a warhammer lay nearby. She retrieved it and a spool of tape from her bandolier. She was shaking. She knew she had to splint her leg, but the fear made it almost impossible. At last she gritted her teeth and made herself get the task done.

She clamped down on a scream. For a few seconds all she could do was lay there and pant in anguish.

Pulling on a nearby outcropping she got to her feet with another hiss of agony. A look around revealed a scene of desolation. The battlefield had become a charnel house. The dead lay in their dozens, left to rest wherever they had fallen. It was unclear who had won. Whatever survivors there had been were long gone.

One of the haulers was nearby. Gorna limped over to it and examined it. The bed was covered with a tarp. She peeled it back and gasped. This was the greatest prize of all. The one they had heard of, that the Fangs had come all this way to try and seize.

A water purifier. Star-tech, that could strip the worst impurities from a supply. It was huge, must have weighed a ton, but it would keep pure water flowing for the clan for years to come. To come home with this…

She staggered around to the cab and froze. The engine was a ruin, ravaged by shrapnel. The hauler wouldn’t be going anywhere. It had been wrecked. Wrecked by…

The blast of a grenade, detonating in the hauler in front of it.

Gorna heaved a great sigh. So much for the short-lived dream of coming home to a conqueror’s accolades.

The wind was picking up. It carried dust ahead of it, and Gorna undid her rag and wound it over her muzzle instead. There were dark clouds in that direction, and she could hear the thunder now. A storm rolling in. It would bring the black rain, that brought sickness and a withering death. She had to get moving and try to stay ahead of it, as hard as that was going to be.

She scavenged the bodies for supplies. One had a proper filter-mask. She put that on gratefully. Another had a ping-counter, to let her know if the air was dangerous. That went in a pouch. What she needed and wasn’t finding was rations to carry her to the clanhold. Whoever had lived must have taken those for their own journey.

A moan caught her attention. She blinked and limped over to check it out.

The raidleader. He was sprawled, his skull cracked by a hammer blow. As good as dead. He just hadn’t realized it yet. He didn’t seem up to realizing much, his gaze empty and looking right through her.

Oh well. No use wasting fresh meat when there was a trek ahead.

She pulled her knife and set to work.

In something of an experiment I have tortured an AI voiceover tool into reading the above fiction and conjured an MP3 file as an alternative.