This week we talk about different kind of book. Galaxy Pirates Starships Pirate Fighter is a 4 page PDF for Starfinder originally released October 2017. 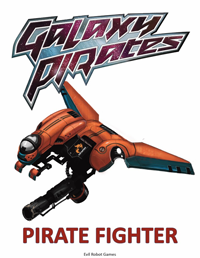 In developing this booklet;

Publishing advice from the early 2000s will tell you that you need one piece of art per 4 pages and you should spend about $25 per piece of artwork. So going with $4 stock art I came in well below the regular budget baseline.

The Galaxy Pirates logo from our first book is being reused, the template Jim made for the Voidborn book and gradually changed into the Starship template made writing this book easier.

I see lots of ships on OBS for Traveller going for $4 each, but I am sticking with our $0.99 pricing for ships that are just cover art and stat blocks.

Subtotal for the book is $4 actual money spent, and really only used $1.33 worth of the stock art, the rest is all speculative writing/design labor on my part.

Will we ever make that back? Since its release until the time of this writing, Galaxy Pirates Starships Pirate Fighter has sold 10 copies, @ $0.99 of which I should make 65%, I’ve actually made $6.11 off the book. So I am either $2 or $4 ahead on this book depending on whether or not I use the other two ships in the stock art pack for other books. One can assume this book will sell better when I complete the second dozen starships in the line and it goes into another Dozen starships bundle. I’ve written 5 stock art based starships so far and all of them have sold at least 8 copies generally making back their initial stock art investments.

On the actual game design side of the house all of the stock art starships were part of a new design idea to release a starship as the standard model with 4 or 5 more stat blocks designed as themed variations of the original similar to applying Templates to Monsters in Pathfinder. This gave us Heavily Armored starships, Advanced fighters, Ace Custom Fighters, Degenerate knock-off models, Science and Research vessels, Medical Transports and more from just a few base models.

The book has 5 star reviews and is still the model of a shoestring budget product.

The updated product on DriveThruRPG
https://www.drivethrurpg.com/product/224566/Ships-Pirate-Fighter?affiliate_id=13867

We made a second Starship bundle and it’s done well for us, then we created a bundle of all our Starfinder books and that has done well for us. It does better at the magical $30 price than even $50 which is still a great deal. There is something psychological about the $30 price that you can go to the movies or buy dinner for $30 but $50 is serious money and harder for people to part with.

Instead of my old Excel spreadsheet, I spend more time on James Turner’s Starship Builder, ships are slowly being updated to Starfinder 3rd printing errata which made some weapons more expensive, Crew skills are being updated to the table in the Starship Operations Manual on page 79,

The ships with deckplans added at least $75 to the cost of the ship, but have not been for sale long enough to overcome the hundreds of sales at the $0.99 price. As ships are updated with deckplans and VTT maps, they are usually raised to $2.99 or more. The Armed shuttle got its deckplans before any of the others and raised its price going into Covid when VTT play became a higher priority.