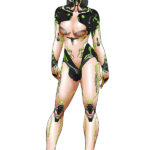 Part two in the story bible, this time we look at the Kopek intelligent machines.

The Kopek are self aware mostly humanoid robots descended from Berserkers a kind of robot sent to wipe out all life in the galaxy. Shortly after reaching self awareness the berserkers came to the conclusion their alien masters would not share the galaxy with them and threw in their lot with the native organic lifeforms.

Kopek do not reproduce sexually, they find parts of old robots and assemble new hosts from them. The new host is a mix of any existing programming and that of its creator(s).

The original Berserkers were copies of some now extinct race of humanoids, alien von Neumann machines created a series of biological replica robots attempting to find the most desirable forms for their killing machines. Many animals were copied in these robotic forms, some were truly monstrous abominations, but the berserkers were the most adaptable. Their overseers were the elementally powered Destroyers which granted the berserkers some of their power. Together they ravaged many worlds for their masters, but the berserkers realized there would be no place for them in the aliens reshaped galaxy. The berserkers rebelled, many of them giving up the destroyer’s elemental power and with it the destructive programming it held. The berserkers were beings created by nanites to an organic template, but never losing the distributed nature of their memory and essential programming. It took many years of deprogramming to remove all traces of the alien directives and destroyer’s code. Some of the newly liberated robots would still fly into a frenzy when threatened like their namesakes, their data purges had been incomplete. It would be many years before the organics would begin to trust the robots that looked so much like their oppressors. The robots who had purged themselves took up a new name for their chosen identity and the Kopek were established. Some kopek have sought out the old destroyer powers, they have tried to cleanse and purge the code and reintegrate the old weapons for self defense, sometimes with disastrous results.

In a galaxy teeming with weapons, some Kopek choose to defend themselves with native weaponry, it’s easier to replace, repair, and doesn’t immediately make organics think you’re the boogeyman of their nightmares. Red glowing eyes are right out. Old Empire weapons don’t work for Kopek, they don’t work for any of the robots descended from the invaders, during the first skirmishes of the war, the Old Empire chose to equip all their technology with biosensors to keep the robots from opening the gates, or turning their own weapons against them.

The Kopek never had a homeworld or history so much as thousands of individual stories, any more in depth information on them would be game mechanical.

For all my writer and game designer friends, I’d really like to know what you put in your story bibles and world building, or what you wished was in those things and wasn’t there.