For a long time now I have wanted to write a tutorial about buying art commissions from artists on the internet. The internet is full of cautionary tales for artists about not getting paid, the internet is getting fuller of step by step tutorials by artists on how to achieve a certain look or effect, and many of them are now letting the fans watch as they do the work. To my mind there is still a dearth of information about how to commission artwork.

The images here are from an upcoming game supplement about a race of Spacefaring Warriors known as the Katar.

The first piece was this Katar warrior in traditional Desert Garb. He didn’t start out looking like this though. 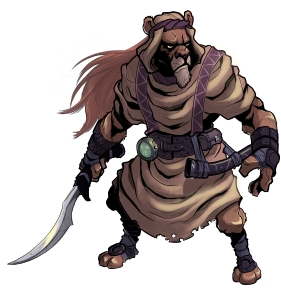 Katar are Lion-men with legs that zig-zag like a lions hind legs. Their torsos have a pronounced front ridge like a ‘breastplate’ their ribcages haven’t flattened out like humans have. They have a full muzzle like a lion does, more like a werewolf, not flat-faced like humans. Older males have a prominent mane of hair, and very old males will have cultivated a beard. Their dress is very like desert nomads, long tunics or surcoats with wide belts. When outside they wear robes and arabic like head dress with a back piece over the neck. They are a spacefaring race so modern or even futuristic touches can be added. They have powerful paws, and the size of their paws mean they don’t have trigger guards, or handguards on much of their equipment. Their native technology is very well made and dependable, but rough looking. Think German or Russian, or even Dwarven. Katar dueling knives have big slightly curved handles because the user typically has huge hands. There is a basic flat guard separating the handle from the blade, and very little ornamentation. These knives can be hundreds of years old and are passed down from generation to generation.

Initially Anthony gave me something that looked like this. 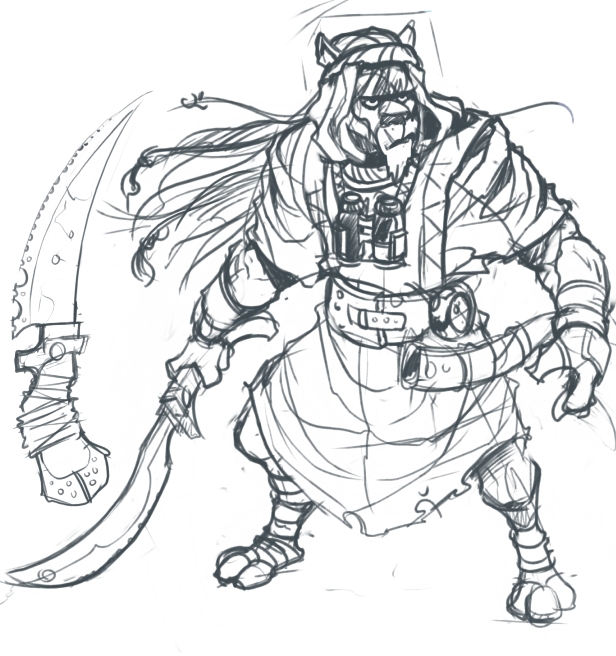 While there is a lot of good material here we kept, I didn’t like the top heavy blade design, and the Binoculars screamed “Earth Technology” to me and seemed very out of place in the world I was trying to create. I didn’t say no to binoculars, just they shouldn’t look so very Earthlike. Katar and Humans haven’t had much opportunity to trade in the setting and even the Humans in the setting would have something more High Tech. Also I was trying to establish a Traditional Look for the Katar before we went too High Tech with them.

Anthony sent me another Sketch for the sword based on my input and we got this. It was closer to what I wanted, but also seemed too flimsy for a race of great big lion men.

I took a photo of Anthony’s original sketch and I drew a french curve line from the bottom of the blade to the point taking a lot of the extra weight off of it, making it shaped much more like the knife, then took another photo of that and sent him this. 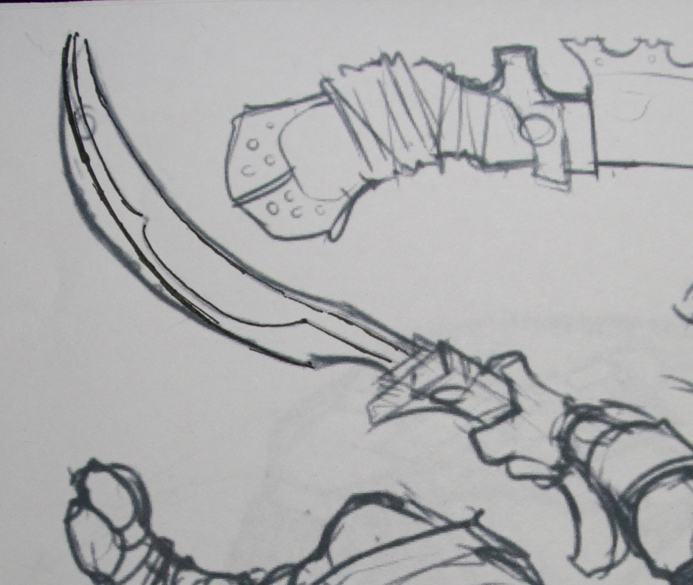 The next image was sort of interim, we just got rid of the binoculars, I didn’t say anything about the slack jawed look on his face, the beard, his ears, or big forehead at the time. Any differences you see in the final piece weren’t from my direction, but an artifact of Anthony cleaning up the sketch and going final. 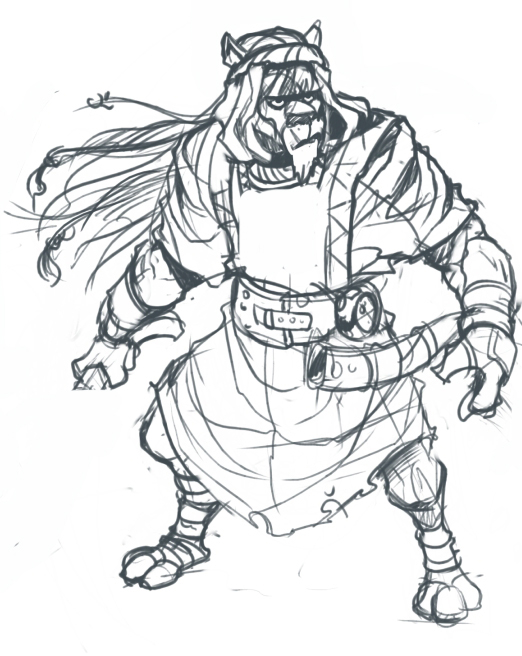 While a lot of the basics are still there, if you compare the sketch lines to the final you’ll see a lot of fine tuning was done by the artist. Eventually we ended up with this. The semi-final piece rendered a little dark and made it hard to see all the details so Anthony lightened it up. 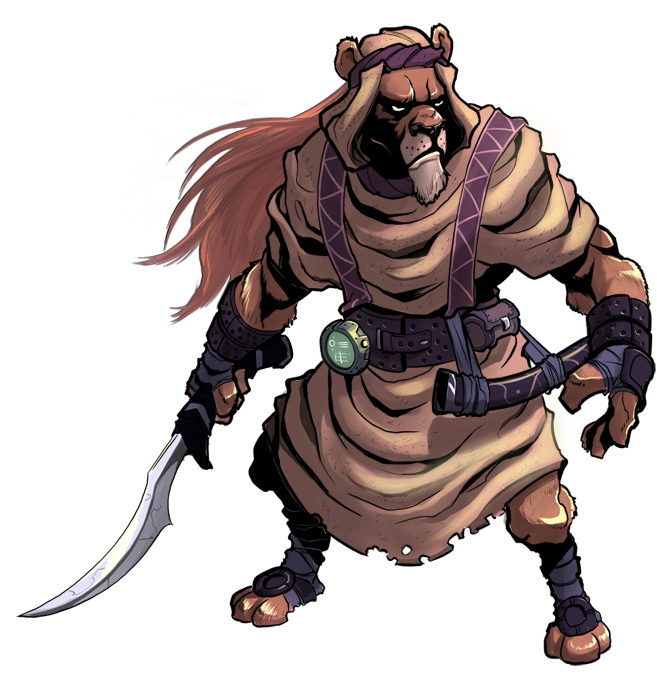 Ok other things to touch on, Anthony and I had worked on one other piece before this, it was the Cyborg Samurai that passes for the Evil Robot Games logo/mascot right now.

-He offered me a price break if he could resell the image as stock art, but I didn’t take it because I really wanted my book to have a lot of art people hadn’t seen before.

So without saying anything about Anthony’s rates (he’s been in a lot of RPG industry titles and he’s quite reasonable, also fast), I, the buyer, made several mistakes here.

-I ordered a piece of artwork for a project without knowing how it was going to be used in a final product people would pay money for. That means the choices about size, color or black and white had no relationship to the project budget.

-I didn’t have a project in mind so there was no idea of how many pages it would be, which would tell me how many pieces of artwork I would need.

-That there was no project also meant it couldn’t be compared to other similar products available for pricing and sales information which means I don’t know how much money I might make back on it.

-Which means everything about the project is a big speculative risk. I had a steady day job at the time and -none- of these things mattered to me, they should have and if you want to make money in the RPG industry they should matter to you.

Final notes on artist rights, I allow the artists I work with to put the artwork up on their personal galleries, to use them in profiles or interviews with the artist, artists need good pieces to promote themselves and if the work they have done for you is that good, show it off. This might just come back to you as all artists have followers and anything about your project in a magazine might build buzz for your product too. Another Katar piece that Anthony did for me ended up in a Magazine interview with him as they wanted a Landscape scene and he didn’t have many.