So in December of 2017 I was playing around with making size Large bases for Medium sized 28mm miniatures. I had bought the Square one on the left and it has three wooden parts, a very thin flat 2×2 base, 2×2 middle layer with a hole in the middle and a 1×1 filler for the hole. I have no reliable means of keeping them together in my bag and haven’t seen another one on sale since I bought this one. The other solution is to put Alea Tools or other brand magnets on your Medium bases and use the Alea Tools 2 inch circular marker as a Large base.

Anyhow I went over to Tinkercad and built up a 50mm cylinder that was very short, then I put a 26mm square hole into it leaving maybe 2mm under the figure for the base. I may put a hole in the base for inserting a magnet, but right now I’m working on the simplest thing that works. 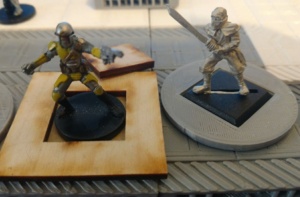 What’s that you say? That’s all well and good for square based metal ninjas, but what about round based minis? Glad you asked.

In only four easy tries I printed a Medium to Large adapter that fits round bases. 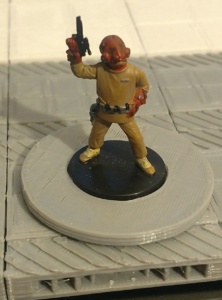 So this figure fits exactly in the donut, pick them both up as a unit, or pull him out of it without being afraid of breaking him. Other factions from this series I tried and they fit in loosely so you couldn’t pick up the combined unit by the medium creature. Still clever folks could use magnets or two sided tape, rubber cement or the like to temporarily bind them together.  Word of warning to the DIY amateur modellers out there Tinkercad doesn’t deal well with half mm spacing so your center is going to be off if it is an odd number. Also depending on how fine the detail on your printer is you may need a little gap around the base.

Sometimes you need a Large sized ninja or other square based mini such as the promo minis WotC used to give out. The indent on this one is not as deep as the circular model and it was offset by one millimeter but it still looks good. The fixed version with deeper offset base socket is printing right now. 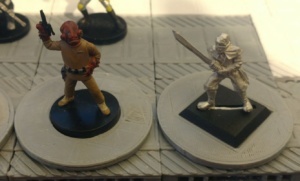 This is the upgraded version, the bases aren’t quite flush with either, I just want them deep enough they don’t fall out whenever someone bumps the table. 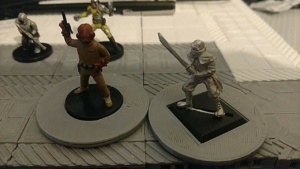