Today I take a look at Screaming Eagles a board game of air combat. 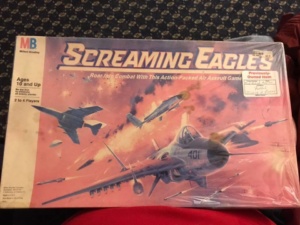 There’s a 5-6th pages that were folded back but instructions look to be in good shape. I may or may not be missing one battle card. 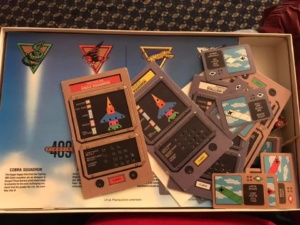 Gameplay
The game is competitive Blue planes vs Tan planes at two players, but is slightly Co-Operative at 3 and 4 players in that there are players you shoot at and players you don’t shoot at. You can’t actually make moves that help another player such as taking a hit for them or launching one of your flares for them. 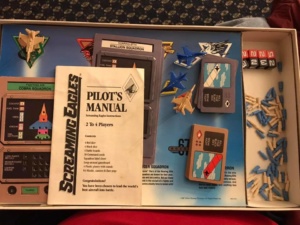 Turn Order
Game has an “I go, you go” turn sequence where the blue teams always goes first and third, a round is over when all 4 planes have moved. Round 2 tan goes first, round 3 blue, all other turns determined by who has the most planes left, that’s weird right?

Actions
Choose a command card, move your plane, fire a missile or cannon. Command cards are combinations of go straight ahead, break left or break right, and roll 1, 2 or 4 dice. There are 9 cards for each plane one for each direction and number of dice. I do have all 36 command cards, I miscounted the first time through. Command cards go back into the players deck and aren’t discarded. The black dice are 1d3 each. Red dice are labeled 0, 2, 5 twice. If you move beyond the edge of the map, you reappear on the opposite side like asteroids.

If you hit an enemy plane there is a hit location chart, the cockpit is a four on 4d3 and the other thing that will absolutely kill a plane in one hit is at 12 on 4d3. Everything else ticks boxes.

Defense
At the beginning of the gamer each plane gets 2 flares, a flare discards the highest red dice rolled against you, you choose to launch it before the missile rolls to hit.

Turn Order
So thinking about this, it looks like a random turn order would prevent things like X color team goes at the end of one round and also the beginning of the next round. The problem with the order as written is I could go twice (end of turn 1, beginning of turn 2) take a setup turn getting closer to my target and then attack them at shorter range with greater chances of success before they got to move again. With random initiative this is still possible, but I couldn’t count on it so I probably wouldn’t waste my turn making the setup move if my target could just fly away on their turn.

Gameplay
Target number equals range is fine for equal sides in equal planes. We can’t account for planes or pilots with different abilities much less different missile capabilities such as radar guided missiles. Maybe we just add chaff for radar guided missiles and nothing changes. Different planes with different speeds and different missile load outs would change the game. This game is 2D and only has 3 moves, you could add altitude as another dimension, but also add more aerial combat maneuvers.

Objectives
It’s just asteroids, you fly across the board forever, there is no objective except shooting down enemy planes. Adding Co-Operative moves would change the game.

I hope you’ve enjoyed this little analysis, I’m working on an Aerial Combat game for ERG and part of that is looking at what has come before, what works and what doesn’t.