On the Second Generation Destroyers I really want to push away from the suits of armor and elemental magic themes. So we push outside that box with this guy, he’s supposed to be a the Anti-Matter Destroyer, he’s powered by anti-matter, shoots anti-matter and has whole lots of the stuff magnetically contained inside its chest. You kill this guy and he’ll probably go boom. The Head, Chest, Shoulders everything is different except his Claws look a little like the very first Destroyers, that and the three point feet. 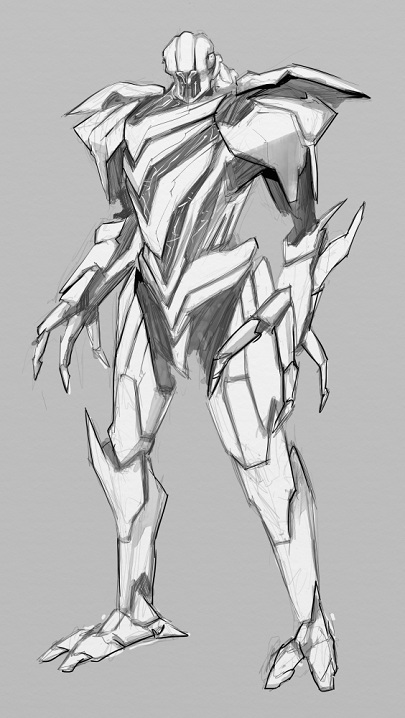 I ask Tomi to clean it up and we’re good, no small heads, no tiny feet, no proportion issues, the huge claws just seem to work. this one is kind of thick in the chest, but still thinner than most of the brutes. 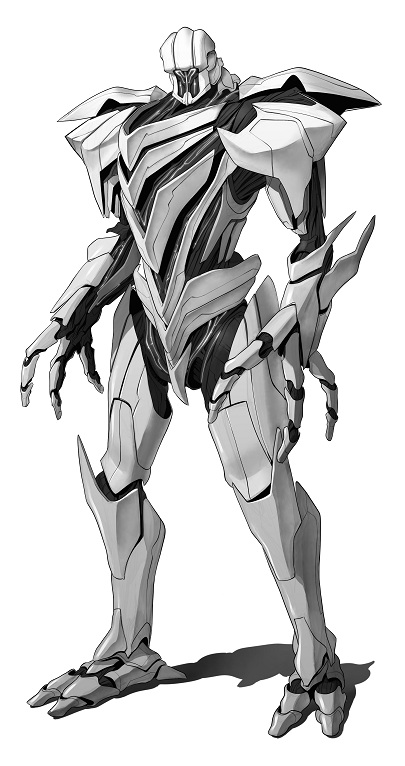 Final image is nice, but anti-matter is kind of its own thing, what I want are forces now, stuff from physics. So next we move onto the Gravity Destroyer. 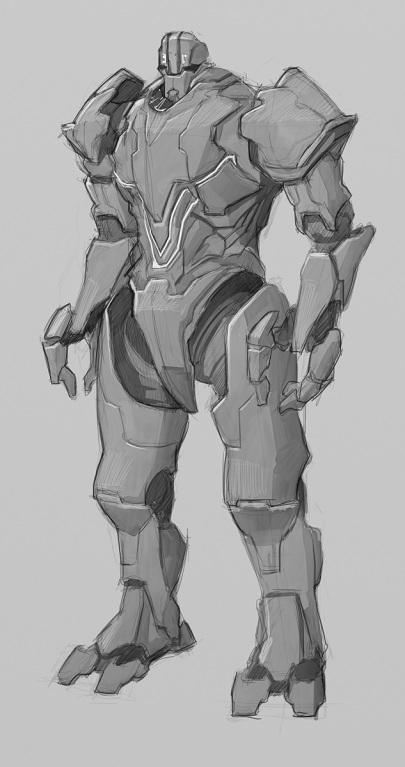 The feet and everything are Blockier this guy is gonna be strong and slow, but the power it will have will suit that just fine. His head is TINY, so we talk about that, and the cleaned up version looks like this. 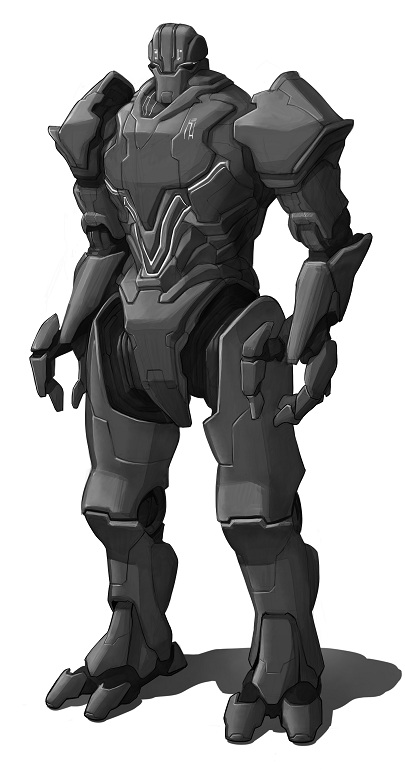 Now Gravity we’re going to talk about some distortion effects on it while it is in action, it has a Smash/Stomp style attack that sends a Gravity wave out and knocks its opponents on their butts. Claws are big enough to do damage, but not cartoonish. Some of the triangular lines in the chest and overall look are similar to the Anti-Matter bot, but this one is its own creature.

After Gravity we decided to challenge Magnetism, not many visual cues you can use for that, but we’ll interfere with Radio and Radar, we’ll shake some metal objects as they are pulled towards the sound of the stomping. 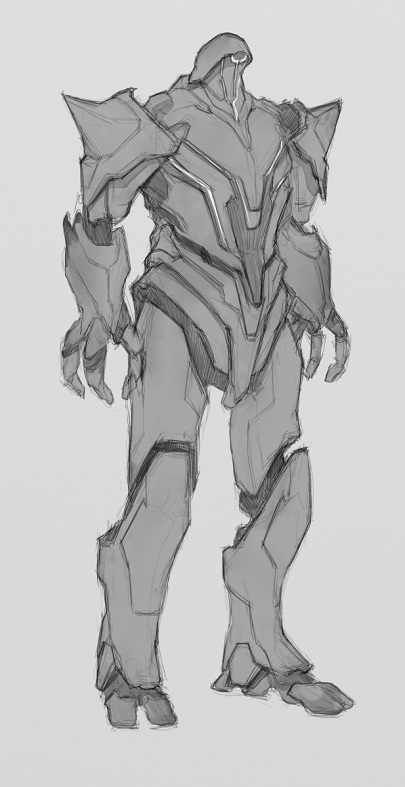 This one bears a striking resemblance to its 2 earlier models, but sports a new facemask and different Pauldrons, the first clean lines edit comes out really dark and I have Tomi lighten this one up, so the final looks like this. We might have gone a shade or two lighter still, there is a lot of detail missing around the claws. We really didn’t get any pinstriping on this one or the Gravity model.

So if Anti-Matter pushed us away from our previous visual style the other two brought us back to blocky robots, not guys in suits though. So for the last one of the Generation 2 models we try Force, this one was supposed to be visually challenging and hopefully it will be just as challenging and satisfying as a designer to make the monster work.

I’m a fan of Mamouro Nagano’s Five Star Stories and I want to try something like the Transparent Armor on the latest generation of Led Mirage Robots from that series, I send Tomi references for every transparent model kit I can find on the internet and this is what we get.

To really do the concept justice we’d almost need to do a 3D model of the insides and the outside and then render them both, or do at least 2 layers of drawings for each shot, rendering one of them transparently over the inner model later and whatever background is behind the creature. Another thought we had while designing this is that the robot basically just appears as its unarmored insides when it is shutdown, and then can project the armor which is more of a Force Field when it needs it, an advanced version of this concept would shape the armor to be more like Gravity or Magnetism to slug out combats against Tanks and Power Armor. Then it could project a lighter shell like Anti-Gravity or Electricity when fighting Light Armor vehicles and other fast moving opponents.

All in all I like my 2nd Gen Destroyers. I hope these two last articles help you recognise the design elements you can use to tie various creatures together.

-The final images were done in black and white, none of these are done in color or rely on color, but none of them have the sort of obvious cues that show what their powers are either. I will have to figure out the narrative cues that differentiate these robots from one another, before the first shots are fired.