So broadening my view of D20 based Science Fiction games I looked at Spaceships and Starwyrms, it’s based on the 5th edition of the world’s blah blah blah fantasy game. 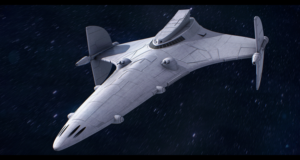 The Eldred Intermediate Cruiser is a Large size Destroyer Frame in Starfinder.  The upper engineering deck is approximately 38 squares long or about 190ft,  which is technically a Medium size ship in both systems. We’ll see how well it stats out in SnS.

SnS uses the Computers skill for many of the same tasks Starfinder does, Mechanics instead of Engineering, Piloting is the same in both, and the Attacks in SnS starship combat are Dex or Int instead of Starfinder’s Gunnery check. Ship scans give information about the target ship similar to Starfinder scans except being 5e based the DCs don’t move around a lot.

Looking at the Chassis, the Light Cruiser closest approximates their Battleship (Large) in that it’s the first ship with a standing bridge crew and larger crew compliment.  6 of the first 7 ships chassis have a minimum crew of 1 for the pilot and can hold a typical 4-6 person adventuring party as their max crew.  While Starfinder has more large ships, the Starfinder starship system itself is very focused on the 4-6 man party vessel. I assume this focus is caused by the origin in fantasy adventure games and the core audience from the same.

The Eldred Intermediate Cruiser has Shields equivalent to a well protected fighter or shuttle and so one of the cheaper defensive systems seems appropriate. There are Ten to choose from, you cannot fit all defense systems into all ship sizes. The 35 barrier points that come with Defense 2 are probably enough.

There are 18 weapons mixing missiles and beam weapons together.
When I built the Eldred ships in D20 Future originally they all had point defense lasers (look along the hulls for small spherical turrets) and so those wouldn’t go amiss on the SnS version. The Starfinder version of the ship has 4 guns; the main gun is divided into the wingtips, there is a gun over the bridge, 2 small turrets and a missile launcher. The SnS chassis has 8 weapon slots.

Development Slots/Systems: The Eldred Intermediate Cruiser would have the Armory, Cargo Hold (cu ft depends on ship size), Escape Pods (scales), Extra Crew Quarters (for the Marine compliment), Medical Bay (scales), Recreation Suite (Gym). The extra stuff adds up to 4 or 5 slots and 1 of the extras can go to the marine barracks. Unlike Starfinder the systems server to customize the non-combat nature of the ship and don’t have listed costs like the chassis, defenses or weapons do.

Battleship 60k, Mk 2 Defenses 5k, Energy Array? The Eldred Intermediate Cruiser in Starfinder doesn’t have nearly that many shield points. Having one size Array for the really big ships isn’t exactly where this cruiser fits. We have other ships with hundreds of shield points that would suit the array better. 2 Swivel Guns 2k, 2 Heavy Guns 6k, Void Missiles 2.5k  This total puts it in the 80k ballpark of a military funded vessel.

As far as things go the Intermediate Cruiser doesn’t stack up against the Tier 3 and Tier 4 Battleships in the core rulebook. As I try converting more ships over, I would expect that to change.

So as the SnS Battleships  are a little bigger and have more room for internal systems the Battleship chassis should fit all Galaxy Pirates Destroyer frames which include the Eldred Light, Intermediate, Classic and Pirate Cruisers. The Katar Fast Attack, Heavy and Light Cruisers fit there as well. The Eldred Heavy Cruiser and Black Knight both use a Huge Cruiser frame.

The SnS Pioneer frame and Starfinder Explorer have s lot of overlap.

Light Lasers and Gyrolasers end up being Swivel Guns, while other things like Coilguns can become Longshots or Heavy Guns.

The SnS Developments and Starfinder ship systems with a direct correlation are the Armory, Brig, Escape Pods, Medical Bay, Recreational Area, Science Lab. There are a lot more systems with functional overlap, but different  names. There are a few systems on each side with no equivalent on the other.

Starfinder has 4 quadrants for weapons and shields which adds some complexity to combat and maneuvering that SnS does not. As I look at different combat systems, having one pile of hit points and one pile of shields with all weapons firing at all targets is a valid abstration that I hadn’t considered.

The real winners in SnS are weapons that are better vs shields, hacking enemy ships, autopilot, engines have a warmup time, weapons with a recharge time. So in some ways they give more consideration to their ship combat and others they simplify it.

Hacking enemy ships in SnS depends on your range to the target and gives the science officer something more interesting to do. Science Officers can also angle the shields to better deflect an attack for less damage, which gives them more to do and combined with patching might keep scrappy ships in the fight longer.

Shields in SnS come with defenses and different defenses are limited to ships of certain sizes. In Starfinder armor and defense are separate from each other and from shields so a vocal internet faction favors no armor, no defenses and all shields. Shields can be repaired in combat and cost less than armor or defenses for guaranteed protection. Weapons that did extra damage or overwhelmed shields would take those designs out right away.

Shield allotment is a thing in Starfinder but not in SnS. Power allotment isn’t a thing in either game as if this writing, SnS doesn’t even have different size power cores or power budgets. Starfinder has power budgets, different size power cores and in the Character Operations Manual had a class ability that’s only useful in power management so we might see that change in the Starship Operations Manual.

Starfleet games made us allocate power to shields, weapons and movement every round. Battletech made us track heat which would be very real in space combat and several space combat systems use Newton’s laws of motion in ways not touched on in these lighter systems.

SnS does have different kinds of power cores that are resistant to computer hacking and EMP for instance. This adds a little more depth of gameplay that Starfinder doesnt have. Oddly enough dark energy power cores are going to feature in our Black Ships dungeon crawl.

SnS doesn’t seem to differentiate the ship sensors while Starfinder has short, medium and long range sensors in budget, basic and advanced for 9 different choices. Again with SnS systems simplified as they are there not balancing a point budget adding a bunch of sensors doesn’t make sense.

So Ken Burnside said there’s a problem in Space  Combat that also exists in vehicle chases where only the driver makes meaningful choices. Hacking the opposing pilots controls then feels like agency for the Science Officer. I was wondering if Gunners could use suppressing fire or similar tactics to suppress enemy ships? In a game with multiple fighters covering one another this would be useful.

Looking at fighters the Tiny Fighter frame has no development slots, which means they could still add some zero cost systems such as Autopilot, or Underwater. Escape Pods which start at 0 still require a minimum Small size ship. So far neither Starfinder or SnS will let you build a fighter with an ejection seat.

The SnS Shuttle chassis has fewer development slots than the Starfinder shuttle has expansion bays so some shuttle designs will need more rework than others.

Lastly, until the next thing, in SnS speed and maneuverability are set by the chassis, so all fighters are the same speed no variation, they’re all equally maneuverable too. While Starfinder sets the maneuverability of a given frame, they modify it with heavy armor to create some variation. The speeds available to a given frame follow a range of thruster options and you pick which one you want on your ship. Faster options limit your armor class in Starfinder which I find odd, with real world jet fighters the speed you’re travelling cuts down on maneuverability, but fighter pilots slow down when they want to make tight turns so the modifier should be based on current speed and not top speed. I may have mentioned this elsewhere. So while I feel the options available to Starfinder in this space allow more variety than SnS, Starfinder isn’t flawless in this area either.

Expect me to break down all the things involved in building starships and we’ll do a chart involving several ship construction and space combat systems. I’m not looking for the most options, but the best selection of options that finds the right tradeoff between fun and added complexity.

I can see a player wanting to have the fastest ship in the galaxy, that’s literally not possible in SnS. Maybe contested piloting checks or something could have a race to see who’s the fastest, but you couldn’t build the fastest because all chassis are alike. I’m not sure where I personally fall on the ease of use to complex customization line because D&D players and Pathfinder players are pretty divided into less and more customization camps any swing too far in one direction will necessarily drive away players from the other.