We’re going to talk about Starships, digging deep into the what look  like shallow waters to plumb surprising depths and watch out for the undercurrents that will sweep you away.

Yeah, that may be a promise I can’t keep, lets see. 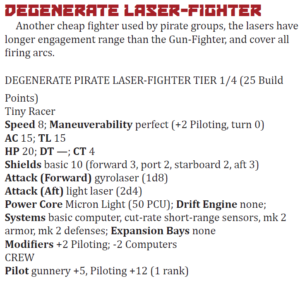 Shields 10 CRB p 302 the Engineer can regenerate 5% of the ship’s PCU as shield points. There are many different breakpoints in the shield table where you get more shield points for the same amount of power, or more shields for just one or two more build points.

Attack (Forward) Gyrolaser (1d8) 5 hexes range            In a posting to the Starfinder Society Facebook page Thurston Hillman announced that stat blocks would start including the range increment of starship weapons. Weapon ranges Short/Medium/Long are given in the weapon charts, but what they mean is given on CRB p 303 under range. Adding this bit into the stat block means you don’t have to crack open your CRB in starship combat just know how far your pew pews go.

Power Core CRB p296 there may be multiple cores that fit your ship’s size, there are four that give you more than 10 PCU per BP. You should be able to power everything on your ship at once, including Thrusters OR Drift Engine, you’ll never need both at once. Unlike the Sample stat block, you call your Open Content a Hyperdrive.
Systems you buy them, they show up here, the ship’s basic computer is equal to a computer from CRB p 213 at half the ship’s Tier minimum 1.
Expansion Bays you buy them, they show up here.
Modifiers this is where the effects of the ship’s Frame, Thruster Speed, Sensors CRB p301 and Computer bonuses to any skill check all end up.

Crew here you list the ship’s crew by their starship role, their skill ranks and total modifier including any modifier above except the ship’s computer bonus. Is the majority of NPC crew stat blocks the crew are all good at their jobs. The math for computing NPC crew skills is on CRB p 326. Despite saying typically one crew member has mastered their skill, on a multiple crew vessel the Captain (Social skills) and the Pilot (Piloting) are often Master in those skills. Despite the fact Gunnery isn’t a skill it’s always the same as the Good skill of other crew members. The Ranks of the crew skills are equal to the ship’s Tier, this is most important for pilots because they add their ranks to the ship’s AC and TL.