The second in a five part series on Worldbuilding the Eldred race. 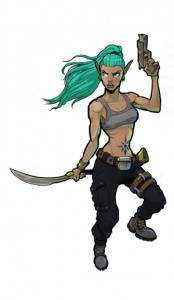 Using Ideas that change everything I applied it to the Eldred race. What we know about the eldred is that they were romantic dreamers and explorers with a passion for life that was almost wiped out in the war against the Slavern. Postwar Eldred have taken very pragmatic approaches to their survival, the mandatory period of conscription in the postwar navy has created as many highly qualified merchant captains as it has infamous pirates.

The Eldred aren’t Tolkien Elves,they aren’t aloof from the affairs of the galaxy, they aren’t one of the older spacefaring races and their way of life was nearly destroyed very recently. The original Eldred people were an ash grey stock, as they moved into the stars the long voyages tinged some explorers with a yellow pallor.  One of the first colonies brought on a freakish but harmless purple color, the scientists sent to study the phenomenon were themselves affected. As the best and brightest chose to stay in their adopted new home a culture of science and learning developed and the home of the purples became home to innovation. Most of the colonies developed a warmer tan skin tone under different suns and atmospheres. A culture of pseudoscience and dietary restrictions trying to avoid everything that was discoloring the new colonists lead to a very pale subculture on the homeworld. A freak and unpredictable event (a toxic gas released by asteroid collision) on a remote colony lead to people turning red with very unstable neurological changes. In a broken mirror image of the problems on the purple homeworld, the military ships sent to contain the reds were almost immediately converted themselves. The reds call themselves Crimson Elves.

The Eldred Admiralty are somewhat inspired by the British Navy of the Age of Sail era. As mentioned below the Admiralty must come to terms with changing their at all costs wartime strategies to one that judiciously spends the lives they are sworn to protect. Another theme is how do you manage a growing colony of individuals, there aren’t any natives to exploit and you don’t run it quite like a business when the workforce and the product are one in the same.