So our first Soldier was a Close Quarters Combat specialist, I sent two reference photos to Enmanuel, one guy with an HK MP-5 and another with an M-4, both were in the same pose and all other details were identical. One was a guy on deployment the other an ad for a shooting competition or gear. Together Enmanuel came back with this. 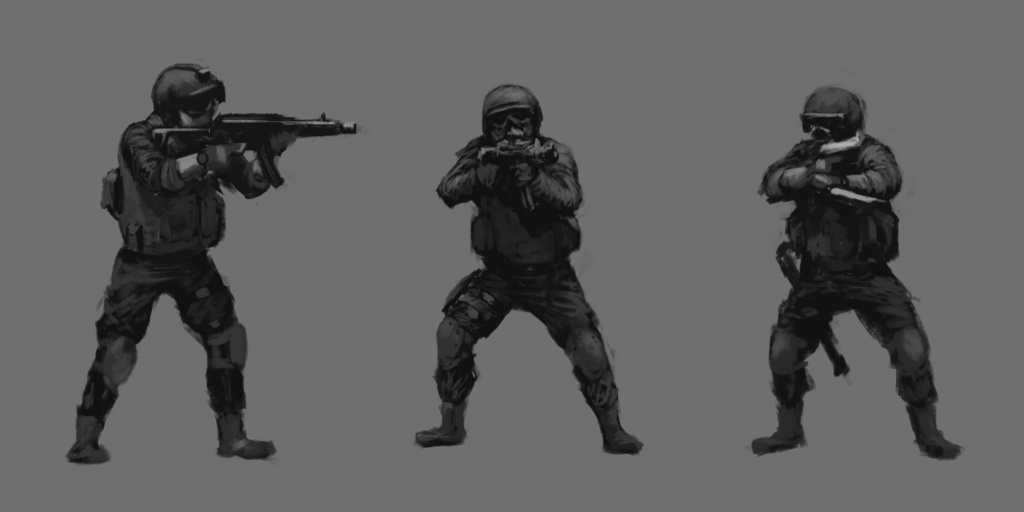 From left to right Sketch 1 was very close to the reference material, but looked too straightforward, in both references the weapon was aimed down slightly creating more tension in the frame. Sketch 2 in the middle was a little more action-y, but not what I was looking for. Sketch 3 wasn’t what I wanted for this piece, Enmanuel was trying something different and I wanted to keep it in mind for later. 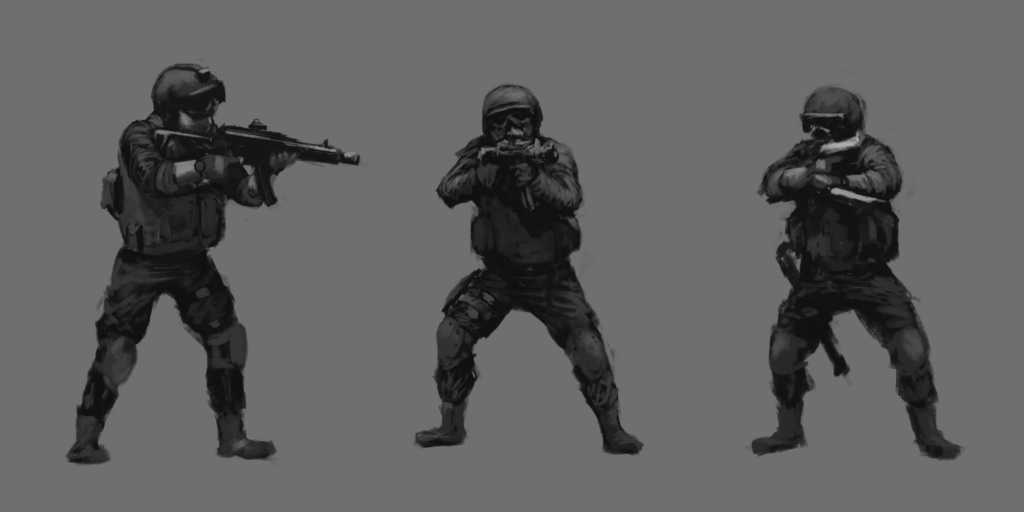 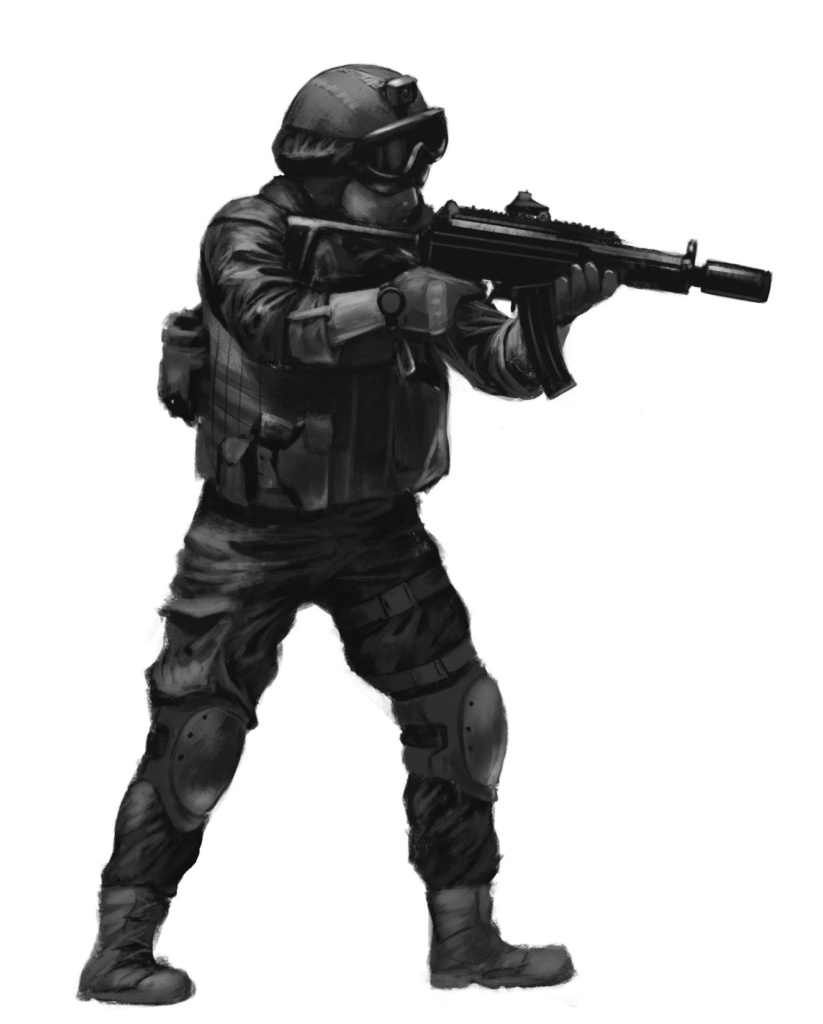 The CQB Specialist was the first of the soldiers, 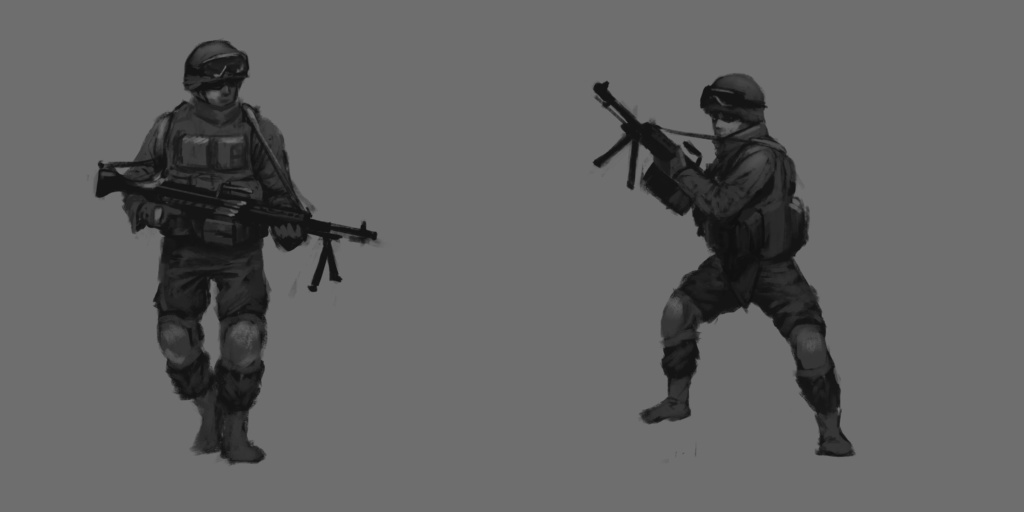 There aren’t a lot of references for SAW Gunners, Sketch 1 on the left didn’t have any drama or tension and Sketch 2 hid all of the interesting details away from the viewer. So I asked Enmanuel to flip Sketch 2 and give me back the detail. We also tried increasing the angle on the weapon in Sketch 1. 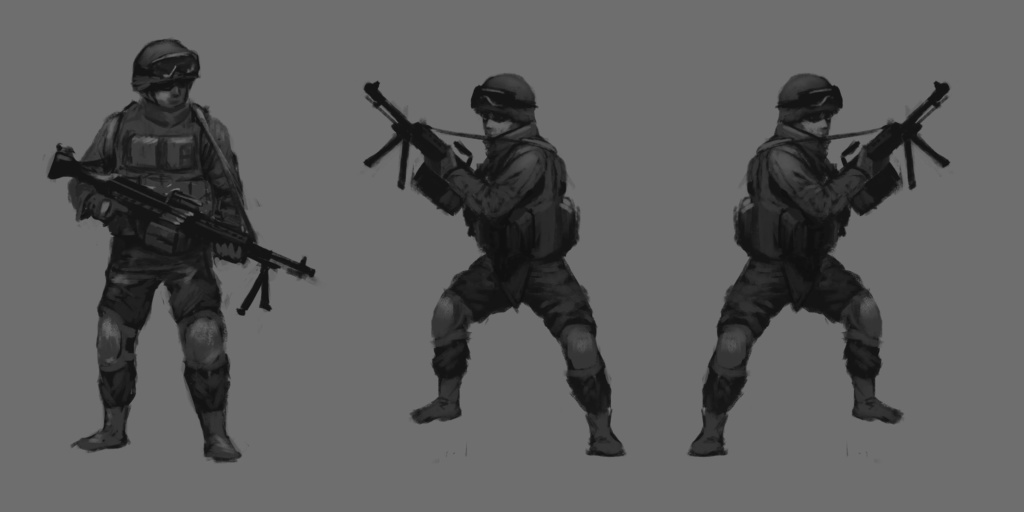 Better, I liked the angle more, I think ideally we’d have changed the hand positions and brought the weapon to the forefront of the frame, but I liked what we had now more than what we started with. Maybe we have the only left handed machinegunner on the planet. 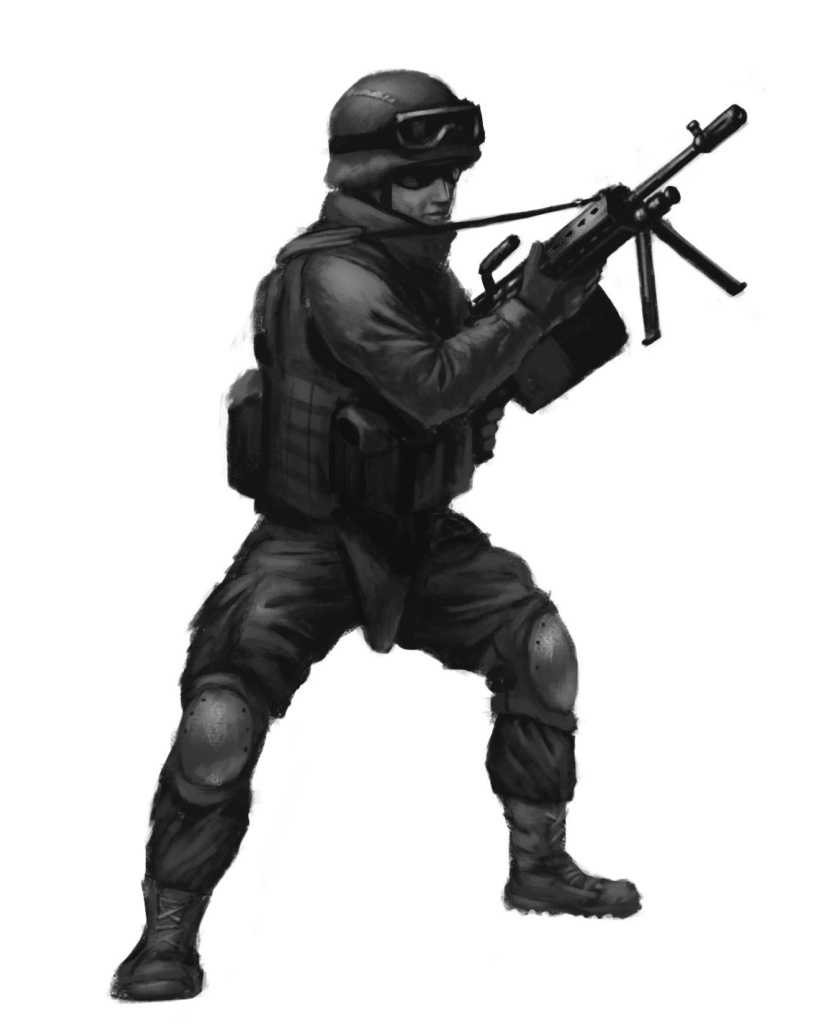 Final Light Machinegunner and onto the Rifleman art. 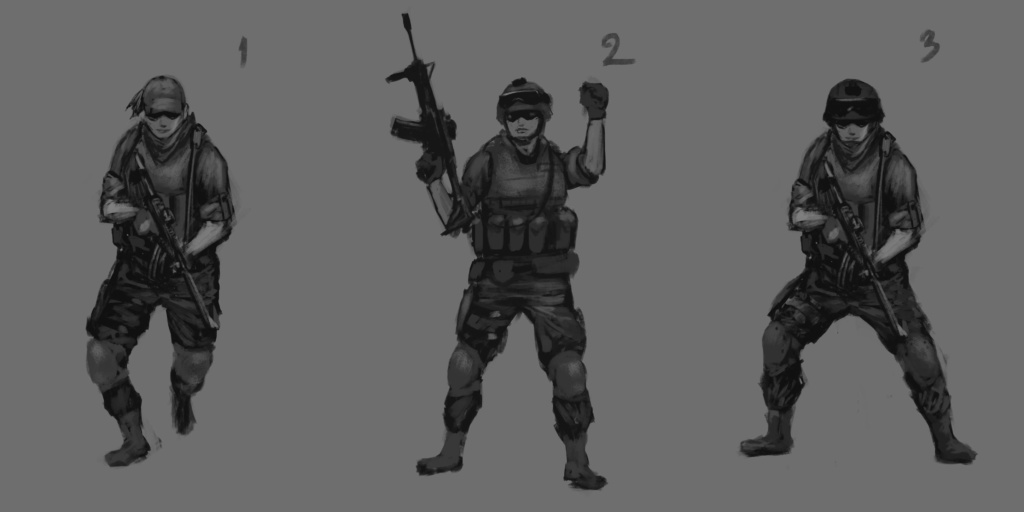 Sketch 01 legs were off, but essentially the same upper body pose as sketch 03, and sketch 02 in the middle just seemed like the best of the lot. 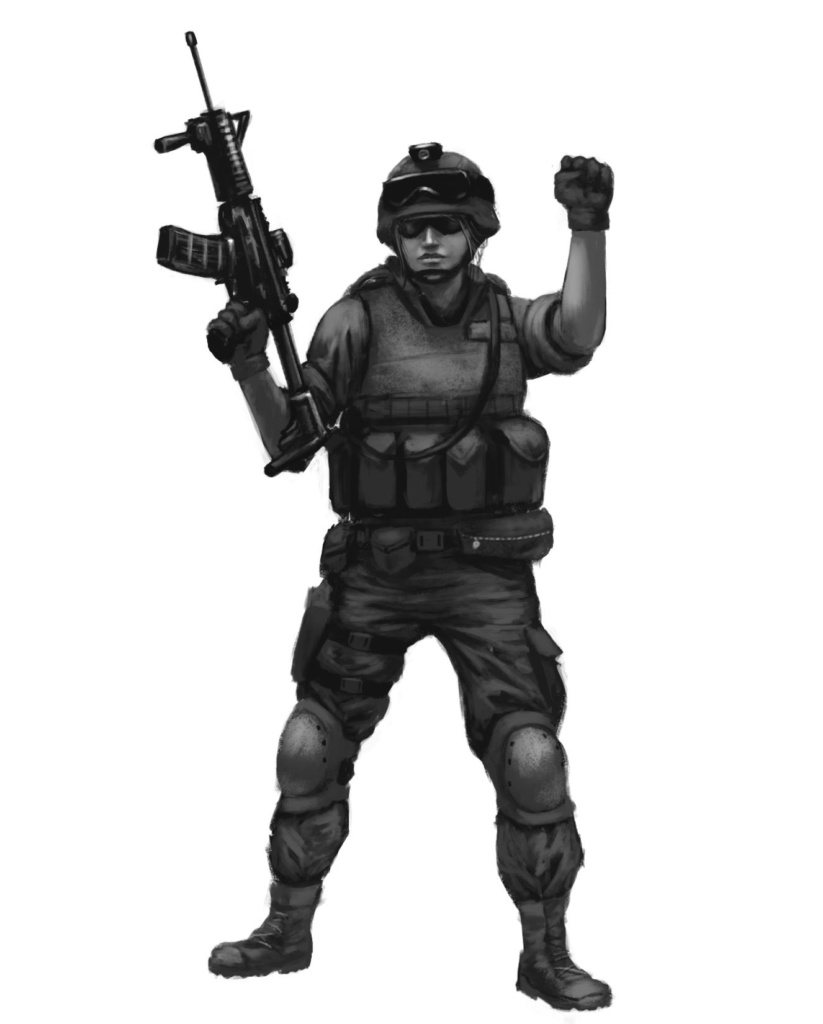 Rifleman Final, and onto the Riflewoman, I send over some References of a Woman with an M-16 and underbarrel 203 Grenade Launcher, in a black outfit and neckerchief. Up until now I had been using guys in body armor and so all of these sketches get body armor because Enmanuel thought that was the theme. This is clearly my fault, you have to be specific. So Sketch 1 isn’t what I’m going for and I’m not happy with the legs. Sketch 2 could be a nice insert somewhere, but not one of the pieces I want right now. Sketch 3 had the most going for it. Now I wanted to add a woman to the book, but if you can’t tell from the art that she is in fact a woman then did I accomplish my goal? So I asked for something like Sketch 3 without the armor and more like the original references. 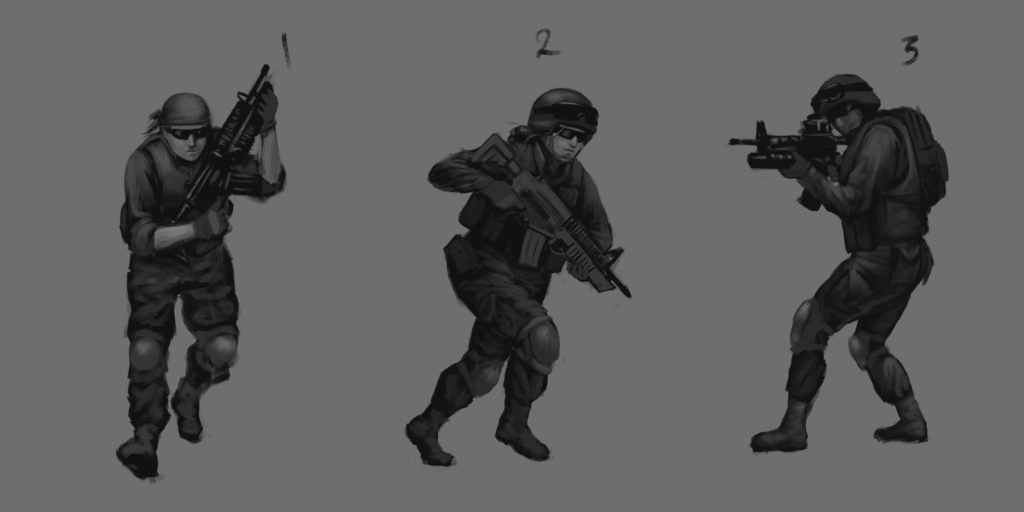 Sketch 1 gets better, Sketch 2 gets better, but Sketch 3 is what we go with. No armor, no helmet, but I kind of intended this supplement to cover lots of military options and not just guys in full body armor. 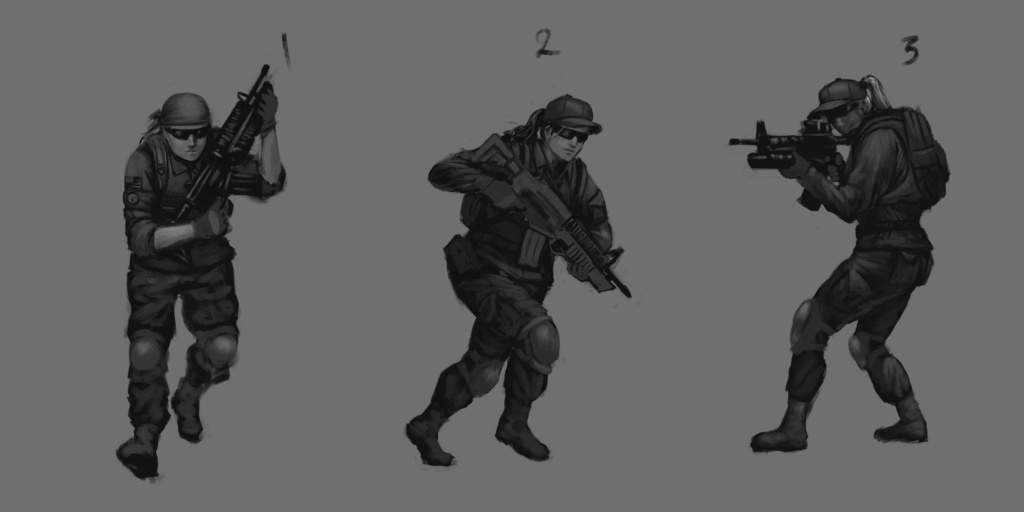 So our final Riflewoman is much better, she aims down her sights, her stance isn’t too wide. I also have somebody pointing to the left in case we want to do a collage of characters on the cover. 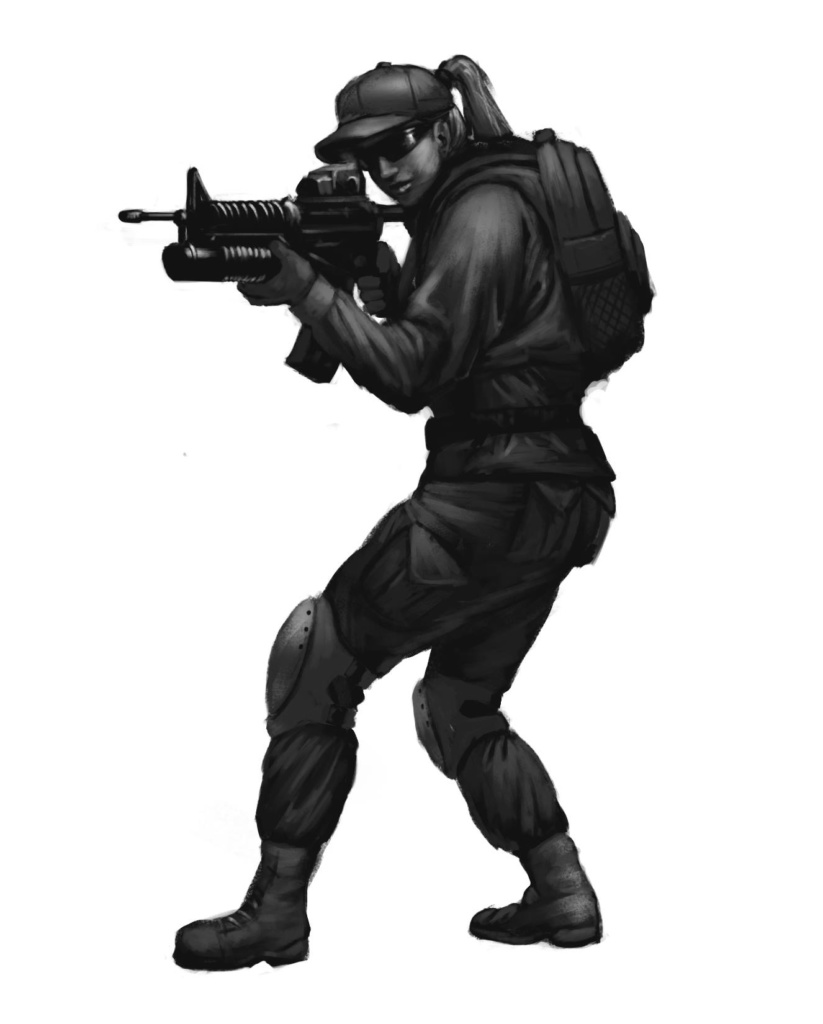